Skip to content
Access Denied
IMPORTANT! If you’re a store owner, please make sure you have Customer accounts enabled in your Store Admin, as you have customer based locks set up with EasyLockdown app. Enable Customer Accounts

Brooding, Feeding, and Raising Our Poultry

Make sure that you have heat lamps ready and a warm brooder area, prepared before hand.

*See our biosecurity suggestions for all customers as well as an explanation of what biosecurity means, listed here:

We always recommend sanitizing the brooding area, waterers, and feeders every single time that you raise birds. 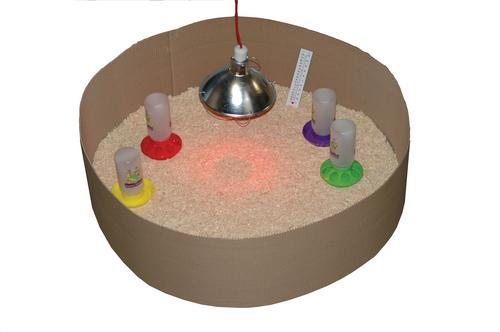 NEVER introduce chicks into a cold brooder, which has not been prewarmed.

Feeding and Nutrition Recommendations By Category

Require a 21-22% protein mash broiler chick starter feed. Feed this for the first 4 weeks, then switch to a broiler grower feed. It is not necessary to restrict feed. We recommend keeping feed available to the chicks 24/7.

Require a specific layer chick starter. Most layer starter feeds contain 18-20% protein, feed this layer starter feed, until 18-20 weeks of age, or the first egg, whichever comes first. Egg layer starter feeds are formulated to give chicks what they need to prepare their bodies for egg production. Provide chick sized grit and plenty of fresh water.

Once you receive the first eggs, you may switch to a layer pellet ration. With some feed configurations, if the label says to do so, a prelay or developer feed may be used in place of the layer starter feed, after 8 weeks of age, up to the point of lay. It is always recommend to switch to a layer pellet once the birds are in production. NEVER use a broiler or meat bird feed in place of a layer feed, they are formulated differently. We do not recommend using an "all flock" or "all purpose" type poultry feed in place of a layer ration, they are formulated differently, and are not intended for use with high production layer breeds, such as the breeds which we offer.

Typically, egg layer breeds will not lay well, or at all, if fed a meat bird feed.

When ready to molt your mature birds, feed a 20% broiler feed and if using lighting, decrease lighting to below 10 hours per day. Note: this will cause your flock to stop laying entirely. We recommend allowing your flock to molt once every year to a year and a half. Allow your flock to molt for 3 to 4 weeks, then place them back on their layer feed diet, and bump your lighting back up above 12-14 hours of light per day, within 2-3 weeks, your birds should be back in production and laying again!

Require a 26% or higher, protein mash or crumble starter feed. 28% protein is optimum. DO NOT attempt to start our turkeys on a broiler starter feed (23% protein or less), as the risk of tendon and ligament damage, and a condition called "Spraddle Leg" increases.

Feed the turkey starter feed for the first 8 weeks, then switch to a turkey grower feed, with a crude protein level of 22%. Feed this until the poults are 14 weeks old, then move to a 16% protein turkey finisher feed to maintain weight until processing, and to obtain best results.

Ducks intended for general purposes or egg production should follow this schedule:

Always give ducklings access to water for at least an hour before feeding. We recommend always using a chick starter with 20% + protein for the first 10 weeks, switching to a 15% grower weeks 10-18, and a 16% layer after 18 weeks.

Ducks intendented for meat production should follow this schedule:

Always give ducklings access to water for at least an hour before feeding. We recommend using a chick starter with 20% + protein for the entire growout period, usually 7-7.5 weeks for Hybrid Jumbo Pekins, and 12-14 weeks for Khaki Campbells.

*Deceased chicks in the morning? The most common cause is temperature fluctuations during the night*

*The most common cause of chick death is incorrect brooder temperature. *

The most common cause of early chick loss is incorrect brooder temperature.

REMEMBER, chicks as day olds are very similar to snakes or other reptiles, in that they cannot fully self regulate their body temperature for at least 3 to 4 weeks.

You are providing the source for the chicks' internal temperature.

As chicks get older, they do need less heat, so please refer to the temperature chart for approximate temperature settings.

As day olds, chick do not require much space, in fact, too much space can cause chicks to wander away from the heat source, and then become chilled, which may cause chick loss.

With turkey poults, sometimes using marbles in the waterers can prevent drowning. Be sure to sanitize marbles before placing them in the water. LISTEN to your chicks. While chirping is normal, excessively loud chicks, are typically stressed chicks.
Check to make sure that chicks are not too warm or too cold. Over time you will decrease the amount of heat.

RECORD when changes in temperature are made or observed.

Use non-pasteurized apple cider vinegar as a preventative measure to ensure and promote good chick gut health and help replace electrolytes lost during shipping, due to shipping stress. 1 table spoon per gallon of water is typically adequate. This can improve chick vigor and overall chick quality dramatically.

Or feel free to use the resource listed below, for more information.

WE APPRECIATE YOUR BUSINESS!